I have to confess I wasn't at Tynecastle today so there's no mini report on the game. Apparently many of the Hearts players simply couldn't be arsed so it would appear I didn't miss much...

If only we still had the likes of Drew Busby playing - he would have booted a few backsides.
Posted by Mike Smith at 13:19 1 comment: 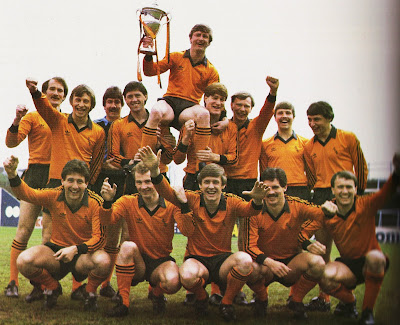 The great Dundee United team that won the Premier League title in 1983. When Eammon Bannon and Maurice Malpas still had hair...
Posted by Mike Smith at 13:31 2 comments:

Edinburgh was bathed in sunshine today as spring finally appeared to have sprung. This encouraged 14,000 fans to head to Tynecastle to see if Hearts could secure the single point required to take their place at the SPL End of Season Top Six Banquet. In the end Hearts got all three points and so will face the Old Firm and Edinburgh's lesser team - presently in self-destruct mode - one more time before the season finally comes to an end.

Hearts injury list is such that they were again missing several players for today's game against Jim Jefferies former side. In fact one wondered if the watching Vladimir Romanov may have fancied putting on a pair of boots - he would probably have done more than the bungling Christian Nade who made a rare appearance in Jefferies team today. It's fair to say most of the frustrated home support wished he hadn't...

The only goal of a quite awful game came after half an hour when Suso Santana drove the ball home from an angle just inside the penalty box. Ironically the goal came at a time when Hearts were down to ten men, Andrew Driver sucummbing to what appeared to be a hamstring injury.

Jimmy Calderwood's Kilmarnock offered little threat other than the aptly named James Fowler who appeared to kick everything in sight - and get away with it. The referee wasn't helped by the assistant who ran the line in front of the Wheatfield Stand and gave the impression he was watching a different game entirely, much to the disgust of the home fans...

Top six it is then for Hearts who are now just six points off free-falling Hibernian in fourth place. And there is still one more Edinburgh derby to come...
Posted by Mike Smith at 14:04 2 comments:

Sarcasm and the Football Fan 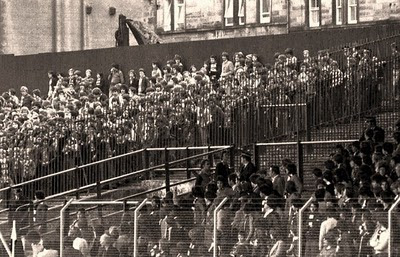 Something struck me the other week (what? An original idea for an article? Nah!) Not something physically although the infamous Mrs Smith did interrogate me as to why it took nine hours to get home from Tynecastle when we beat Hibs last month. She wasn’t convinced the traffic upheaval caused by Edinburgh’s tram works was the cause, as I suggested - rather she heavily suspected I had been partaking alcoholic refreshment in a hostelry or two in Gorgie, celebrating Hearts triumph. What occurred to me during that afternoon was how football fans have changed over the years. In particular the chants emanating from the stands.
Those of us who can remember standing on the terracings of Tynecastle and most other football grounds in Scotland will recall a very different society to what we have today. I should point out to younger readers that the majestic splendour that is Tynecastle Stadium today wasn’t always around. In the dark days of the 1970s and the happier times of the 1980s, most fans stood to watch the famous Heart of Midlothian at Tynecastle - and the majority of other grounds across Scotland, the all-seated Ibrox and Pittodrie Stadiums being notable exceptions. Hearts fans were likely to remain in the likes of the Tynecastle Arms and The Diggers supping a pint until about 2.45pm before heading for Tynecastle and standing on the crumbling old terracing. No ticket required, just pay at the gate and walk in.
Football began as a working class game and epitomised its class with the average punter heading for the cheaper option of standing on the terracing while those who could afford to would pay that little bit more for the luxury of sitting in the main stand. I always used to smile when I heard it called the main stand - for the majority of my four decades following Hearts there has been only one stand.
For those of us stood on the terraces the spirit of togetherness would forge an atmosphere that would define our status. We had worked damned hard all week for not a lot of money but we chose to spend our hard earned cash supporting the team we loved. Moreover, that atmosphere created songs and chants which reflected the mood of a less prosperous time. In the 1960s and 70s in particular, violence at football was, sadly, all too prevalent. Fuelled by alcohol - during those decades, it was still possible to take alcohol to football and many fans supped from cans of ale while cheering on their heroes - some football chants were dripping in hatred. ‘You’re gonna get your f***ing head kicked in’ and ‘It’s magic you know, there’s gonna be Gorgie aggro’ were heard most weeks from those wearing maroon and white colours. It was a sad indictment of the time that ‘You’re going home in a f***ing ambulance’ was often proved correct to some unfortunates who followed the opposition when they were set upon immediately after the end of the game.
We still have football related violence today although it now rarely happens inside the ground thanks to all-seated stadia and close circuit television camera. Any violence is more likely to take place in nearby streets although police intelligence has reduced this to an exception rather than a rule. For that, we should all be grateful.
Perhaps this is why the football chants of today are different too. My view is that sarcasm is more likely to be used now than any threats of violence. This was particularly so during the aforementioned Hearts victory in the recent Edinburgh derby. Hibernian are the self-proclaimed purveyors of silky, flair, Brazilian like football - as their fans never tire of telling us. So when Hibs keeper Graeme Stack launched yet another high, long and aimless ball to his hapless team mates the chant from a mocking home support in the Wheatfield Stand was ‘It’s just like watching Brazil!’
There are many other such ditties. Before he left for Middlesbrough, Aberdeen’s Lee Miller was taunted by ‘You used to play for a big team’ from Hearts fans who recalled his spell at Tynecastle a few years ago. Rangers fans have recently taken to chanting ‘There’s only one Tony Mowbray’ in recognition of the former Hibs manager’s less than successful few months in charge of Celtic. One of the most memorable chants came a few years ago when Rangers and Scotland keeper Andy Goram pulled put of the national team because of an alleged schizophrenic related health condition. Cue the Kilmarnock fans chanting the next time Rangers visited Rugby Park ‘There’s only two Andy Gorams…’
We should be thankful that fans are no longer singing about kicking each other’s brains out and are instead offering the opinion to opposition fans that ‘you’re not very good’. It’s an old adage that sarcasm is the lowest form of wit. As far as Scottish football fans are concerned, it’s developed into something of an art form - something at which they are very good!
Posted by Mike Smith at 12:53 3 comments: 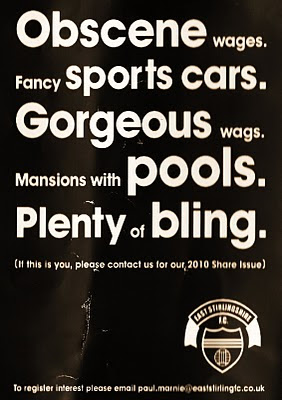 The mighty East Stirlingshire - Falkirk's finest football team - are about to launch a share issue. They are what community football is all about. If anyone fancies contributing to a worthy cause and helping grassroots football, please email paul.marnie@eaststirlingfc.co.uk
Posted by Mike Smith at 13:06 No comments:

There was a humorous note in East Stirlingshire's matchday programme for today's clash with Albion Rovers. It was noted that the 'annual race to avoid promotion had begun slightly earlier than usual'. This was not only a reference to Shire's rather spectacular fall from grace in recent weeks but the likes of Berwick Rangers and Forfar Athletic also seemingly contriving to play 'after you Claude' with promotion play-off places up for grabs.

Today, thankfully, the Shire got back to winning ways with a thoroughly deserved victory over a Albion Rovers team who still have play-off dreams of their own thanks to having so many games in hand of their rivals. The return of Paul Weaver was a huge boost for the home team and, after a bright start by the visitors, Shire took the lead on twelve minutes when the impressive Craig Donaldson's cross was headed home by Simon Lynch.

After fifty six minutes Shire sealed the points when brilliant play by Weaver set up Lynch for his second goal. The former Preston North End and Dundee striker went off shortly after with blurred vision which, apparently, was caused by a migraine.

The final score was 3-1 to the Mighty Shire who remain in second place in the Third Division. Livingston have all but secured the championship - despite losing at Annan today - and Shire have still to clinch a play-off place. But the games are running out and it is inconceivable Jim McInally's men won't be involved in the fight for promotion at the end of the season.

It's only a month away and I can hardly wait!
Posted by Mike Smith at 12:45 No comments: