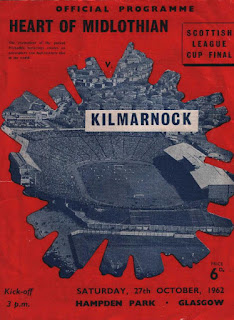 When the draw was made for the sectional stage of the 1962/63 League Cup, it was doubtful if Hearts could have had a tougher group. Section A saw them grouped with both Dundee clubs and Celtic. Dundee now had Gordon Smith in their ranks, the great man having left Tynecastle for Dens Park. Despite Hearts impressive record in the League Cup - as well as their three triumphs, the Maroons lost the 1961 final to Rangers after a replay - there were those who doubted if an evolving Hearts team would make it past the group stages. Many of the players who played their part in Hearts dominance of Scottish football in the latter half of the 1950s such as Dave Mackay, Alex Young and the ‘Terrible Trio’ of Alfie Conn, Jimmy Wardhaugh and Willie Bauld were now no longer at Tynecastle.
Manager Tommy Walker was rebuilding his team and made a significant signing for season 1962/63 when he bought inside forward Willie Hamilton from Middlesbrough for the princely sum of £5,000. The term used nowadays for teams undergoing this process is ‘transitional’ and it certainly looked that way when Hearts lost their opening game in the League Cup, 3-1 away to Celtic. However, they then defeated both Dundee clubs and when Celtic came to Gorgie for the return game at Tynecastle, Hearts chances of qualifying from the section were very much alive. More than 31,000 spectators watched Hearts race into a three goal lead, including two goals from centre-forward Willie Wallace. However, this being Hearts, things are never straightforward and Celtic stormed back into the game with goals from Murdoch and Hughes, the latter being near the end of the game, thus ensuring an uncomfortable final three minutes for Hearts supporters. Hearts hung on for a memorable 3-2 win and, after losing their next game at Tannadice, defeated Dundee in their final group game to progress to a two-legged quarter final meeting with Morton. In the first leg at Cappielow, a Norrie Davidson double added to an own goal put Hearts in easy street and they duly completed the job in the return leg at Tynecastle 3-1 to go through 6-1 on aggregate. This meant a semi-final clash with St. Johnstone at Easter Road where a Willie Wallace hat-trick helped Tommy Walker’s men to a 4-0 win - and a fifth League Cup final appearance in eight years.
Their opponents in the final were Kilmarnock who was in the process of building a fine team of their own. A crowd of 51,280 headed to Hampden Park on 27 October 1962 to see if the Ayrshire team could break their League Cup duck - or if Hearts could win the trophy for a fourth time.
Hearts: Marshall; Polland; Holt; Cumming; Barry; Higgins; Wallace; Paton; Davidson; W, Hamilton; J. Hamilton
Kilmarnock: McLaughlan; Richmond; Watson; O’Connor; McGrory; Beattie; Brown; Black; Kerr; McInally; McIlroy
Referee: T. Wharton (Glasgow)


There was a pre-match blow for Killie when the hugely influential Davie Sneddon was ruled out with injury. However, this didn’t seem to affect them too much in the early stages when they dominated play.

Hearts made a nervous start. In the opening minutes, keeper Gordon Marshall tangled with Killie forward Black and ‘Iron Man’ John Cumming cleared the danger. Black threatened again shortly after and it seemed the Hearts players were struggling with the heavy Hampden pitch. It took the Maroons some time to make an impression with Norrie Davidson creating Hearts first real chance with a rasping 20 yard shot which Killie keeper McLaughlan tipped over. This encouraged Tommy Walker’s men and the enigmatic Willie Hamilton began to revel in the huge space that Hampden had to offer. In the 27th minute, Willie Hamilton produced a piece of magic befitting a major cup final. Collecting a long ball from Willie Wallace, Hamilton deftly controlled the ball, skipped past Killie defender Jackie McGrory and raced in on goal. He looked up and delivered a glorious pass into the penalty box where Norrie Davidson thrashed the ball past McLaughlan to give Hearts the lead.


It was a brilliant goal, created by the magic of Hamilton and finished by the guile of Davidson. Against the run of play, it may have been, but it transformed the game and ’Hammy’ tormented the Killie defence thereafter, although Gordon Marshall had to save brilliantly from Frank Beattie, while Davie Holt made a crucial tackle on McIlroy following a slip from Roy Barry just before half time. Killie’s Jackie McInally – father of future Celtic and Bayern Munich player Alan – was injured during that first half. This was the era before substitutes, so McInally limped bravely on. Hearts took advantage, dominated much of the second half, and could – indeed should – have added to the one goal they had. Then, with just seconds remaining and the Hearts fans whistling at referee Tom ‘Tiny’ Wharton, urging him to blow for full time, Kilmarnock launched one last desperate attack. Richmond floated a free kick into the Hearts penalty box. Frank Beattie rose above everyone to head the ball past the flailing arms of Gordon Marshall and into the net. It appeared Kilmarnock had tied the game at the death. Blue and white shirted players forgot their tiredness and danced for joy. Hearts players slumped to the sodden Hampden pitch. However, referee Wharton was not signalling towards the centre circle. He was giving a free kick to Hearts. The referee had spotted an infringement that no one else appeared to have noticed. Furious Killie players urged the official to consult his linesman, which, to his credit, he did. Nevertheless, his decision remained the same. Free kick to Hearts. Wharton believed Beattie had handled the ball as the cross came in.


Seconds later, Wharton blew his whistle for the end of the game. Hearts had won the Scottish League Cup for the fourth time in eight years, their seventh major trophy since 1954. Triumphant Hearts headed back to the capital for a night of celebration. It had been mighty close but Hearts had proved they were winners once again!


Hearts 50 Greatest Games, is available in all good books
Posted by Mike Smith at 00:16 1 comment: