At the Crossroads of Fate 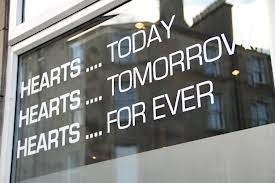 The terms ‘Crisis at Hearts’ and ‘Turmoil at Tynecastle’ have been such constant companions of Heart of Midlothian FC in the last few years it’s perhaps surprising Scotland’s biggest club outside the Old Firm doesn’t charge them rent.


Ten years ago Hearts were around £24m in debt and then Chief Executive Chris Robinson was on the verge of securing – but thankfully didn’t deliver – a deal that would see Hearts sell Tynecastle Stadium in a desperate attempt to alleviate the club’s financial crisis. The main flaw in the plan was that Hearts had nowhere to go. Robinson was prepared to let the club become tenants of the Scottish Rugby Union and play their home games at Murrayfield which has a 67,500 capacity. Hearts had played some UEFA Cup games there as Tynecastle was not fit for European purpose but it lacked the intensity of the Gorgie ground and the prospect of playing run of the mill league games in front of 50,000 empty seats on a wet Tuesday night in November was hardly enticing.


Step forward Lithuania based Russian businessman Vladimir Romanov. With an estimated personal fortune of £240m, Romanov bought a controlling interest in Hearts and immediately declared the club would remain at Tynecastle. Romanov owned Lithuanian side FC Kaunas and as well as vowing to keep Hearts at the ground they had played since 1881, he shipped a couple of Kaunas players on loan to Hearts to help the cause. Hearts won the Scottish Cup in 2006 and split the Old Firm in the SPL to head for the qualifying round of the following season’s UEFA Champions League.


However, there was the other side of the Russian coin. In the years that followed, Romanov displayed a zero tolerance approach to the managers he appointed, wafting P45s regularly. His occasional outrageous statements about the SFA and the SPL, inferring they were corrupt and the media – he once referred to the press as monkeys - brought ridicule to him and the club.


Hearts won the Scottish Cup again in 2012, hammering city rivals Hibernian 5-1 in the first all Edinburgh final since 1896. Now, little more than a year later, Hearts have gone into administration with debts of £25m. Having now declared himself bankrupt, Vladimir Romanov has done a fair impression of former striker Christian Nade – he’s out there but no one is quite sure where. The existence of Edinburgh’s oldest and most successful football club is under threat more than at any time in the last 139 years. Administration means Hearts will begin the SPL campaign – if they survive until August – with a 15 point deduction. With most of last year’s Scottish Cup winning team having long since departed and the first team now principally made up of young players, the fight to avoid relegation begins on the first day of the season.


As bad as that is, the nightmare scenario is what happened to Rangers this time last year – the club is liquidated and has to start all over again in the Third Division. And possibly having to groundshare if the sale of Tynecastle is forced through by the administrator.


There is interest in taking over Hearts with three or four credible bids, including the Foundation of Hearts, a group created by local business people which, if successful will mean the long suffering supporters running the club. Fans have already pledged thousands of pounds to FoH who are in the process of converting these pledges to hard cash in order to submit a serious bid. The next few weeks will prove crucial to the club’s future.


Hearts supporters, as always, have demonstrated an allegiance to the club that is nothing short of astonishing. The administrator announced on 20 June that the club needed to sell 3,000 tickets in 14 days just to keep afloat during the summer months. Unconfirmed reports suggested Hearts sold nearly a third of that number in just 24 hours with the ticket office opening on a Saturday to cope with demand.


I’ve been following Hearts for 45 years. Having endured relegation twice in the 1970s, the cruel twist of fate of losing the league title in the last eight minutes of the season at Dens Park in 1986 and the numerous cup final and semi-final defeats, there’s almost an ingrained pessimistic trait to my outlook.


While the Romanov era brought two Scottish Cup wins - and last year’s hammering of Hibernian in the final will surely never be bettered for Hearts supporters – there has been an unease at how the reputation of our club has taken something of a battering. Now, Hearts stand at the crossroads of fate once more. On the one hand, administration and the real possibility of relegation from the SPL next year are blows the club may never recover from. If Tynecastle Stadium is sold by the administrator, it may well be the death knell of one of Scottish football’s most famous names. There is also an argument that Hearts might have considered administration last season and gone down to the First Division for the new campaign. If relegation happens twelve months from now there’s the prospect of facing Rangers in the First Division in season 2014/15 making automatic promotion that bit more difficult.


On the other, Romanov and his dictatorship has gone, the size of the debt, like a millstone around the club’s neck for decades may be cut like the removing of a cancerous growth. If Hearts can keep their stadium, with season ticket sales increasing by the hour, the atmosphere in Gorgie next season will be more raucous than ever with the fans believing the 15 point deduction can be overcome. Some first team players have agreed a pay cut and the sight of Gary Locke and some of the team at the Tynecastle ticket office today to thank the fans demonstrates the feeling there is for the club. 'Lockie' was always a fans favourite as a player given he is 'one of us' and he has shown more dignity in the last few days than Vladimir Romanov did in eight years.
The problem is Hearts are presently unable to sign any new players and the burden placed on the club’s talented youngsters may be too much to bear. However, if Hearts are under new ownership come Christmas and are still within touching distance of eleventh place in the SPL then new faces may arrive during the January transfer window. The cavalry may arrive – one can only hope they’re not too late.


Next year will mark the 100th anniversary of Hearts players signing up to Sir George McCrae’s Battalion in the Great War, an act of devotion to their country that is rightly remembered every year. The sacrifice of those players is more important than all the games won, lost or drawn by Heart of Midlothian FC in the last century. However, it would be comforting to think Hearts will still be around to mark this important anniversary.


One of Scottish football’s most famous anthems is ‘follow the Hearts and you can’t go wrong’. No one in Scottish football wants the implications of the opening lines of another famous Hearts song – ‘and now the end is near…’