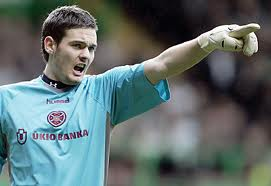 A few days ago, there were a couple of items in the sports pages which caused more than a little sadness. Paul Gascoigne’s admittance to a clinic in the United States for alcohol addiction was not unexpected to those who have witnessed the former Rangers and England star’s demise in recent years. His appearance at an event held just days before his trip to the States saw him cut a tragic figure with him shaking on stage, barely able to speak. We wish him well but one can’t but help make comparisons with another football icon from a generation before Gascoigne - George Best.


The other story was one that was arguably more of a concern for Hearts and Scotland supporters. The news that former Hearts goalkeeper Craig Gordon would not play the rest of this season was hardly surprising given his injury problems. What was shocking, however, was the announcement from Craig that he may not play football again at all. I have to admit this took my breath away.


It’s scarcely believable it’s more than a decade since Craig Gordon made his debut for Hearts as a young, gangly goalkeeper drafted in to the first team in place of the injured Roddy McKenzie for a game at Livingston in October 2002. The 19 year old performed superbly in a 1-1 draw at Almondvale and it was clear Gordon was about to maintain the Hearts tradition of great goalkeepers. From Jack Harkness to Jim Cruickshank; Henry Smith to Antti Niemi; Gordon Marshall to Gilles Rousset; Hearts have always produced gifted goalkeepers. Craig Gordon would prove to be one of the finest for both club and country.


His performance a year later in the cauldron of the Stade-Chaban Delmas in Bordeaux in the UEFA Cup was confirmation of the day the boy wonder grew into a man. Repeatedly, the big fella kept the Bordeaux forwards at bay as Hearts maintained a rearguard action during that first leg in an attempt to keep alive the return leg at Tynecastle three weeks later. His performance, particularly in the second half in front of the 3,500 strong Maroon Army, was one of the finest goalkeeping displays I’ve ever seen. As we kept a constant eye on the stadium clock as it edged closer to 90 minutes and a creditable goalless draw, big Mark de Vries scored a dramatic winner towards the end of the game to spark mass celebrations among the jubilant Hearts support. As a Hearts supporter himself, Craig Gordon took the acclaim of the appreciative Hearts fans. His brilliant performance, added to a fantastic result meant that day in the south of France would be etched on the memory of every Hearts fan who was there.


Two years later and Hearts embarked on a remarkable season that saw them win the Scottish Cup and qualify for the preliminary stage of the UEFA Champions League. In the course of writing a book about that incredible season, I had the pleasure of interviewing Craig at Hearts training facilities at Riccarton. He was amiable and answered my questions knowledgably and with an assurance that typified the way he performed between the sticks. He told me he prepared the same way for every game whether it was a league cup-tie against Queens Park or a World Cup qualifier against Italy. Preparation was the key - and the affable keeper said it was important to remember it was his performances against the likes of Queens Park that helped develop him as a player. His assertion that ‘if he messed up in a Scottish Cup tie against Albion Rovers, that wouldn’t do his international chances any good’ was typically modest of a man who treated every game as if it were his last.


Craig Gordon’s last game for Hearts came not at Tynecastle but at Murrayfield in a friendly against those giants of world football, Barcelona in 2007. Within days, he was heading to Sunderland in a deal worth £9m - a record for a Scottish goalkeeper that may well never be broken.


It’s fair to say things didn’t work out as well as expected for Craig during his time at Sunderland. The Black Cats lost 7-1 to Everton a few weeks later and manager Roy Keane made Gordon the fall guy. He then suffered a knee injury a year later, which kept him out for nearly a year. After a long recovery period, he regained his place in the Sunderland first team until fate took another twist in November 2009 when he broke his arm in a game at Tottenham.


He fractured the same arm again in the summer of 2010 but, once again, fought back to regain his first team place. However, he suffered another knee injury in 2011 and while he came back yet again, he was released by Sunderland last summer.


His knee continues to trouble him and he recently began helping out former Hibs player and now Dumbarton manager Ian Murray with some coaching. Like every other Hearts fan - and Scotland fan - I sincerely hope we have not seen the last of Craig Gordon as a player. I’ve seen many fine goalkeepers at Tynecastle and the big man is among the finest. Losing such a gifted player as Craig Gordon at just 30 years of age would be difficult to accept for those of us who have followed his remarkable journey.


Whatever happens, Craig Gordon will always be a Hearts legend. And, in my view and, I’m sure that of thousands of other Hearts supporters, he will always be Scotland’s number one.

Not So Candid Camera

The atmosphere at the New Year Edinburgh derby last month was frenetic. A hotbed of local emotion, Tynecastle was at its noisiest and for the most part fans of both clubs behaved themselves. However, it’s well documented there were a couple of unsavoury incidents in the second half involving fans and this prompted a statement from the Justice Secretary Kenny Macaskill that the Edinburgh derby should no longer be played on an evening in order to prevent such incidents happening again. I’m not so sure the timing of the kick off had anything to do with what happened and in any case, Lothian and Borders Police praised the behaviour of both sets of fans afterwards, stating there had just been two arrests.


From my vantage point in the Wheatfield Stand, what struck me - if you’ll forgive the pun - was the reaction of many fans, particularly to the incident with the ball boy. The first reaction of many, it would appear, was to film the alleged perpetrator with an array of mobile phones, digital cameras etc. Thanks to the age of the internet and instant mobile communication, it was just a matter of minutes before the incident was broadcast on YouTube to potentially a worldwide audience. My fellow Hearts supporter sat next to me, Bill, remarked to me that it was a sign of the times that fans pulled out their mobile phones to film such scenes. Identifying the suspect and alerting stewards or the police might have been thought a better option but it was indeed a reflection of the age we live in that recording the reaction was deemed more important than shopping the instigator.


The aforementioned Bill is enjoying his retirement years while I reached the half century last year and we both recall the era before mobile phones and the internet when communication wasn’t quite so instant. Like the majority of Hearts supporters attending the magnificent all-seated arena that is Tynecastle these days, I have my mobile phone with me. With mobile internet connection getting ever more sophisticated, I have immediate access to news and, more importantly, the football results as they happen. I recall a few weeks ago Hearts had barely kicked off at Tynecastle when there was a significant audible reaction - okay, loud laughter - among those in the Wheatfield Stand to the news that East Stirlingshire had taken the lead in the first minute of their game with Rangers at Ibrox. The Shire eventually lost 5-1 and there was scant reaction to Rangers fight back. However, it was an example of people expecting, indeed demanding instant news from events happening miles away.


In my formative years as a Hearts fan, in the late 1960s and early 1970s, a mobile phone was my father throwing the old dialling machine across the room on hearing his beloved Aberdeen had lost on a Saturday afternoon. And internet was somewhere football fans in Yorkshire were urging their team’s strikers to put the ball. Unless you were at home watching BBC’s Grandstand or ITV’s World of Sport or listening to the ‘wireless’, getting an update on your team’s progress on a Saturday afternoon proved difficult.


As a child I was only interested in the Hearts score, although in those days the reserves would be playing the corresponding fixture at the venue of our opponents that day and I would always be keen to find out how the ‘second eleven’ were getting on - although I usually had to wait to get the Pink News on a Saturday night to find this out (standing outside the local newsagent about 6.00pm waiting for delivery of the Evening News football results newspaper - The Pink, so called because it was printed on pink paper - became a Saturday evening ritual)


Older readers will recall the halftime scoreboard at Tynecastle and, indeed, most other football grounds across Scotland. The scoreboard usually consisted of large letters against which numbers indicating half time scores of other games would be inserted around 4.00pm. To identify which games were which, you would have to buy a match programme to ascertain that, for example, a 2-0 score against the letter A meant Aberdeen were leading Hibernian at Pittodrie.


Some fans opted to take a transistor radio (ask your grandparents, young ‘uns) with them to games but many of these were a tad cumbersome and the reception wasn’t particularly reliable with BBC presenter Brian Marjoriebanks’ voice doing battle with the crackly VHF frequency.


The days of standing on the terracing several decades ago was a different world to what the match day experience is today. Forty years ago, there were no mobile phones, internet or YouTube to immediately broadcast trouble at football games. Now, as well as mobile media there is close circuit television also monitoring fans behaviour, meaning any indiscretion caused by any fan is almost immediately picked up on.


Given the isolated but nevertheless unpleasant incidents at Tynecastle on 3 January 2013, this is certainly not a bad thing…