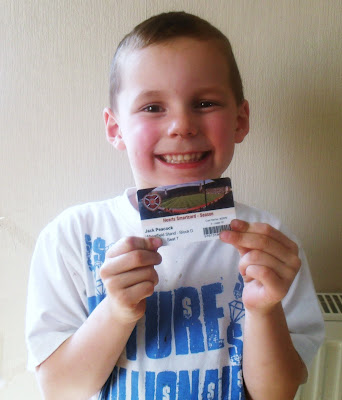 My five year old grandson Jack looks quite delighted to get his hands on his first season ticket for Tynecastle. I'll be taking him to his first football game on August 14 when Hearts kick off the new season against St. Johnstone.
He's smiling now but I suspect it won't be long before he's asking the following:
Papa, why are we leaving before the end of the game?
Why can't the Hearts players score goals?
Why did our goalie drop the ball?
Why is everyone swearing so much?
Papa, why did you throw your season ticket away?
The life of a Jambo beckons for the poor lad. Yes, I know child protection is important these days but...
Posted by Mike Smith at 04:04 1 comment: