One of the best nights Tynecastle has ever seen - September 1976. Hearts were 2-0 down from the first leg of their European Cup Winner's Cup tie against East Germany's Locomotive Leipzig. But a wonderful display in the return in Gorgie saw Hearts go through.

Ah, the memories!
Posted by Mike Smith at 11:42 No comments:

Tommy Murray Sits on the Ball at Ibrox

December 1972 - Ibrox Stadium. This admittedly rather grainy footage shows Hearts Tommy Murray cheekily sitting on the ball before passing to Jim Brown whose perfect cross was headed home by Donald Ford for the only goal of the game. What a shame you don't see such style these days...
Posted by Mike Smith at 11:50 1 comment:

World Cup Qualifier in 1977 - Scotland knew if they beat Wales at Liverpool's Anfield Stadium - switched there from Wales for safety reasons - they would qualify for the World Cup Finals in Argentina in 1978. Commentator Archie Macpherson described the crucial penalty award to Scotland late in the game as 'a punch if ever there was one'. No doubt about that, Archie - although it seemed to everyone bar the referee that it was Scotland striker Joe Jordan who punched it. Did we care? Of course not - and Kenny Dalglish's clincher with minutes to go was sublime.

I still get a tingle down my spine when I watch this - Scotland games aren't just like this any more...
Posted by Mike Smith at 13:21 No comments: 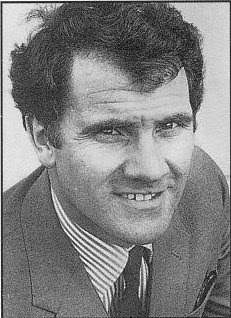 It was with great sadness this week that I heard of the passing of another Hearts stalwart from years gone by. John Hagart is a name synonymous with Hearts first ever relegation from the top flight of Scottish football in 1977 - but Hearts fans remember him as a man of integrity, charm and a passion for their club that was sadly lacking in some of his successors in the ensuing three decades.


His predecessor at Tynecastle, Bobby Seith, appointed Hagart to the Hearts coaching staff in 1972. Seith’s time in charge of Hearts was less than successful and included the infamous 7-0 New Years Day hammering from Hibernian in 1973. Season 1974-75 was the last of the eighteen team First Division and the top flight teams knew they had to finish in the top ten to make the following season’s inaugural Premier Division. Hearts made an awful start to the season. A 5-0 thumping from Dundee United followed 4-1 thrashings from Partick Thistle and Aberdeen. Hearts were some way distance from the top ten - in fact, they were bottom of the league after the Tannadice debacle. Seith was sacked before Hearts headed to Tayside with Hagart put in charge - but he already knew the huge task he faced before United put Hearts to the sword that day. Hagart set about rebuilding confidence and Hearts won their next game - against Airdrieonians before drawing with Rangers at Tynecastle. Soon afterwards, Hearts embarked on a fourteen game unbeaten run and they duly climbed the league table, securing eighth place at the end of the season thus ensuring they would dine at Scottish football’s top table the following campaign. It had been an almighty fright, however - and sadly, the club’s board of directors did not heed the warning signs.

The following season Hearts were again fighting relegation although Hagart’s task wasn’t helped by the fact he had to make do with much the same squad of players who had struggled the previous season. However, Hagart’s infectious enthusiasm rubbed off on these players and after a sticky mid-season spell, Hearts ended the season in style. A 3-0 triumph at Aberdeen in April all but secured Hearts status and this game remains one of the finest performances I have seen from the boys in maroon. Ralph Callachan was sublime that evening and The Dons - fighting relegation themselves - simply could not cope. Hearts run in the Scottish Cup that season turned into something of a saga with replays and second replays required to overcome lower league opposition such as Clyde and Montrose. However, such efforts were rewarded with a place in the Scottish Cup Final, against all the odds and expectations. Sadly, Hearts lost the final to Rangers 3-1 but as the Ibrox men had won the league title, Hearts found themselves in the European Cup Winner’s Cup in season 1976-77 - and with that competition came John Hagart’s finest hour.

Hearts were drawn against East Germany’s Lokomotive Leipzig in the first round and a 2-0 defeat in the first leg in the former communist state meant few gave the maroons any chance of progressing. The East Germans were one of the favourites for the competition. However, on a never to be forgotten September evening, Hearts demolished Leipzig 5-1 in the return leg at Tynecastle to move into the next round. Hearts were awesome that evening and the result was one of the best in the club’s history - they were, for a short time at least that season, the talk o’ the toon!

Sadly, Hearts could not replicate that form in the league consistently and a succession of drawn games meant the maroons were at the wrong end of the Premier Division once more. November 1976 was to prove a turning point. Hearts had drawn West German opposition in the shape of SV Hamburg in the next round of the Cup Winners Cup. Again, Hearts lost the first leg in Germany although two away goals scored in a 4-2 defeat meant there were high hopes that Hearts could repeat their hammering of Leipzig in the Tynecastle return. It wasn’t to be. Hamburg showed they were several classes above Hearts and cantered to a 4-1 win on the night - 8-3 on aggregate. A fortnight later Hearts entertained Celtic in Gorgie and a superb first-half performance from the maroons - including a Willie Gibson hat-trick - saw Hearts lead 3-1 at the interval. However, calamity struck in the second half as Celtic stormed back to win 4-3. In my view, Hearts never recovered from that game and their form dropped alarmingly in the second half of the season. Things weren’t helped when Ralph Callachan was sold - against the manager’s wishes - to Newcastle United for £90,000 in February 1977. Hearts won just one more game that season and finished ninth in the Premier Division come the end of the season - suffering the embarrassment of relegation for the first time in their history.

Few Hearts fans blamed John Hagart for their team’s demise and many wanted him to remain at Tynecastle to oversee what was hoped would be a brief sojourn in the second tier of Scottish football. However, Hagart was devastated by what happened and tendered his resignation.

A year later, Hagart was back in the spotlight as assistant to Ally McLeod, Scotland’s ebullient manager and was part of the ill-fated Scotland party that went to the World Cup Finals in 1978. The less said about that escapade the better. Hagart then had a spell in charge of Falkirk before joining Rangers as reserve team coach. One of the Rangers youngsters under Hagart’s tutelage was Billy Davies, now making a name for himself as manager of Nottingham Forest.

John Hagart left the game when he departed Ibrox in the summer of 1986 at the start of the Graeme Souness era. He returned to his first trade as a joiner before enjoying a well-earned retirement. His passing earlier this week, at the age of 72, is sad news to all Hearts fans who remember a thoroughly decent, hard-working and passionate man who did his utmost under difficult circumstances for the club he loved.
Posted by Mike Smith at 02:31 1 comment: 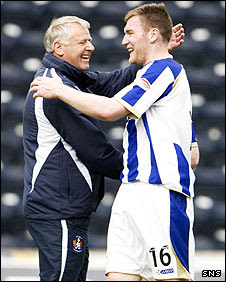 Hearts long search for a striker of some merit was finally rewarded today with the signing of Kilmarnock centre forward Kevin Kyle. The 28 year old left Rugby Park under freedom of contract and has penned a two year deal to be reunited with the man who took him to Ayrshire - Jim Jefferies - and a new career at Tynecastle.

Kyle has impressed me the times I've seen him play and with the departure of the lumbering Christian Nade, it will be a refreshing change to see Hearts actually threaten to score goals. Who knows, the big man may even rekindle his Scotland career.