Hearts continued their renaissance under manager Paul Sergio with a comfortable win over St. Mirren in Gorgie. The Maroons have been unbeaten since Tottenham Hotspur put them to the sword at Tynecastle a month ago but, it has to be said, this was a tedious affair in the autumn sunshine.

I wrote in my column for the Hearts programme about how there are few stadia that can match the atmosphere of a full house at Tynecastle. That appeared to be the kiss of death. There wasn't a full house today and the atmosphere was muted and most unlike Tynecastle. Whether this had an effect on the players, it's difficult to tell but lethargy dominated proceedings, certainly in the first half.

There's a running joke  - if you'll excuse the pun - among Hearts fans about how long the perennially injured Andy Webster will last each match. Webster was listed in the starting line up today but didn't even make it to kick-off - he was injured in the warm up and was replaced by Eggert Jonsson. Webster is a decent defender but there has to be questions asked about his fitness for top class football - okay, then, the SPL...

The only moment of note in the opening 40 minutes was a long range effort from the impressive Mehdi Taouil - himself returning from injury - which brought a fine save from Saints keeper Samson. Just as it seemed the game would be goalless at half time, Hearts Marius Zaliukas ventured forward into the visitors penalty box and was tripped by Haddad. Penalty said referee Charlie Richmond and despite the best efforts of keeper Samson to put him off, Jamie Hamill drilled the ball home for the opening goal. Moments later, David Obua should have doubled Hearts lead when he burst into the penalty box but his effort on goal was saved by Samson when the Ugandan really ought to have buried the opportunity.

Hearts were in command in the second half and secured victory with a second goal 20 minutes from the end when Ryan Stevenson dived to head home Danny Grainger's cross although some reports are stating it was an own goal from Lee Mair. 'Stevo' certainly took the acclaim. There endeth the scoring.

Hearts are now a point off third place in the Clydesdale Bank SPL. A victory is most welcome but Paulo Sergio's mission to change Hearts style of play will be a long-term project - and managers at Tynecastle don't tend to be there long enough for such a transition. Certainly today, it seemed like the game lasted far longer than 90 minutes... 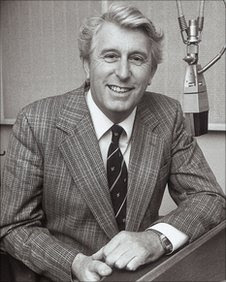 Sad news today about the passing of one of the great football commentators in Scotland - David Francey. The man who commentated on hundreds of Scottish football games for more than two decades until he retired in the late 1980s had been ill for some time.

I grew up listening to David Francey on the radio. He was the voice of football. There was a great story about him commentating on a Scotland game in Romania in the 1970s when he turned, off microphone, to summariser Ian Archer and asked 'Who's that Romanian number 4?' Archer replied 'F*cked if I know!'

Francey then told the listeners 'And Romania clear through Fuctifino...'

Francey said later this was a myth but it's still a great story. There was something almost comforting about listening to the great man on the radio. He sounded like a loveable grandad who would never criticise players or managers and his knowledge of the game was legendary.

A sad loss to football and to Scottish broadcasting.
Posted by Mike Smith at 11:13 1 comment:


Having been out for a couple of shandies on Friday evening, I didn’t venture north for Hearts clash with Inverness Caledonian Thistle. I figured my delicate constitution would struggle with a three and a half hour train journey to the beautiful capital of the Highlands. Instead, I headed to Larbert to see my other team, East Stirlingshire, take on a side now managed by a man still hugely popular with  Hearts supporters - one Paul Hartley (as used to be chanted at Tynecastle)


The man who destroyed Hibernian with a hat trick in the Scottish Cup semi final at Hampden five and a half years ago is now player-manager of Third Division Alloa Athletic and while he opted to remain in his suit, collar and tie for the short trip to Ochilview, there’s no doubt Hartley is already exerting considerable influence over The Wasps. Alloa played a neat, passing game which some might say will prove their undoing in the hurley burley of the basement league although it didn’t stop Livingston powering their way to the Third Division title a couple of seasons back. With former Aberdeen players Darren Young and Robbie Winters providing experience, The Wasps won 1-0 and it was interesting to see Hartley, a rookie manager, continually encouraging his players from the touchline.

Shire played some decent football at times and manager John Couglin has the team playing more of a passing game. However, as has been proved so far this season, Shire have nothing up front and their decent play counts for nothing when they get to the final third of the field. Chances are few and far between so when they do come along they really have to take them. After half an hour, Ally Love had a glorious chance to open the scoring when he pounced on a mistake from Ben Gordon but the Shire man, having rounded the goalkeeper, then contrived to place his shot wide of the post. Inevitably, Alloa scored just before half time when the aforementioned Gordon diverted McCord's cross for the only goal of the game.


I had hoped to see Paul Hartley in action but, with his 35th birthday just a few weeks away, he believed the players in his team would do the business without his influence on the field. And he was right. Having been relegated to the Third Division following a play-off defeat by Annan Athletic at the end of last season, Alloa are among the favourites to bounce straight back up again. Led by a man who remains a hero to thousands of Hearts supporters, I would be very surprised if The Wasps didn’t live up to expectations.

As for Shire, they may be bottom of the league but they won't be there for long. If only they could unearth a striker who knows where the goal is...
Twitter @Mike1874
Posted by Mike Smith at 11:57 1 comment:

Death of a Football Ground


A highly emotive video for devotees of East Stirlingshire FC...
Posted by Mike Smith at 13:03 No comments:

Laced Up Boots and Paulo Sergio 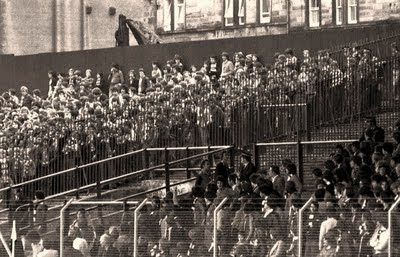 Money may be changing football in a way many of us find disconcerting but while the rich clubs get stronger and stronger as others struggle for survival there remains one constant that has almost become a tradition in the game - certainly from when I first began following Hearts as a six year old in 1968. Namely, the adaptation of popular songs into football chants. Last week, as Hearts celebrated yet another Edinburgh derby victory over Hibernian, Tynecastle Stadium announcer extraordinaire Scott Wilson played a song that has quickly become adapted by the Maroon Army following the recent appointment of Paulo Sergio as Hearts manager. Unlikely as it may seem but the chorus of KC and the Sunshine Band’s 1982 hit ‘Give it Up’ was belted out with some gusto by Hearts fans, their arrangement being Na, Na, Na, Na, Na, Na, Na, Na, Na, Na - Paulo Sergio, Sergio, Paulo Sergio! (forgive me if I’ve missed out a Na or two there!) As I departed the atmospheric Section G of the Wheatfield Stand, Hearts fans were gleefully chanting this little ditty in the direction of those Hibs fans still left in the Roseburn Stand by the time the game ended. Why it has taken nearly 30 years for this song to be adapted is not entirely clear but it’s the latest in a long line of songs to be adapted by Hearts fans for football purposes.


It wasn’t that long ago that another song from that era - Culture Club’s ‘Karma Chameleon’ - was sung by Hearts fans in homage to legendary striker John Robertson (Robbo, Robbo, Robbo - well, you get the picture) However, there are songs from even further back that have become Tynecastle anthems. The legendary Frank Sinatra passed away just a few weeks before Hearts Scottish Cup triumph in 1998. His most famous song - My Way - has been adopted almost exclusively by Hearts supporters as their proclamation they are heading to foreign shores as in ‘So Make a Noise, We’re the Gorgie Boys, We’re Going to Europe’


It’s incredible to think that another Hearts song - ‘By the Light of the Silvery Moon’ (we’re the boys in maroon) - dates back to 1909, the Edwardian era when football was played in black and white and it had been just seven years since Hibs had last lifted the Scottish Cup. More recently, although I’m still going back four decades, is a song by The Beatles. The chorus of ‘Hey Jude’ has long been belted out by Hearts fans - Na, Na, Na, Na Jam Tarts - and the song is still played today by the aforementioned Scott Wilson as the team runs out on to the Tynecastle field.


Another song from the 1960s by another legendary band has become a relatively recent addition to the football anthems. The chorus from The Beach Boys classic Sloop John B has been re-arranged by supporters of clubs other than Hearts - and some, it has to be said, rather distastefully - but the Maroon Army used it to good effect when Hearts went 2-0 up against Hibs in the derby. ‘Your season is over - why don’t you go home?’ When Tottenham Hotspur came to Gorgie last month their fans were greeted with 'Your city's on fire - why don't you go home?


There have been numerous other songs modified by supporters for the purpose of lending their support to their heroes. ‘When the Saints go Marching in’ began as an American gospel hymn but has been chanted at most football grounds in Britain, including Tynecastle.


One of my personal favourites from a few years ago was Hearts fans rendition of ‘Hersham Boys‘, a classic from punk legends Sham 69. Hearts fans used to chant on the Tynecastle terracing Gorgie Boys, Gorgie Boys, Laced Up Boots and Corduroys - although admittedly this had more sinister connotations in an age when violence on the terracings was commonplace. I seem to recall this being chanted frequently during Hearts sojourn in the First Division when the Gorgie Boys would announce their arrival at places such as Dumbarton, Dumfries and Dundee.


I’ve written before about how there are few stadia that can match the atmosphere of a full house at Tynecastle. Money may be influencing football like never before but thankfully, the fans and their songs of devotion to their team will ensure the game will never stray too far from its working class roots. And with any luck, Scott Wilson will be belting out Jeff Beck’s Hi Ho Silver Lining at Tynecastle at the end of the season!