A Different Kind of Embarrassment 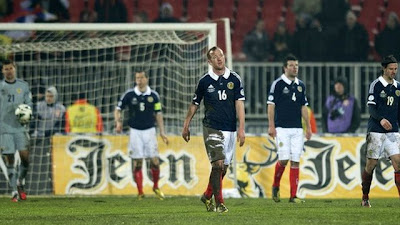 So farewell then to World Cup 2014. Scotland began the qualifying campaign with our Head Coach uttering, almost Ally MacLeod like, that there was no reason why the Scots couldn’t win all of their games. Yet here we are, six games in, with no victories and just two points gleaned from miserable home draws against Serbia and Macedonia. And the bitter realisation that Scotland are not only rock bottom of Group A but cannot now qualify for the football extravaganza that will be held in Brazil next year. To add insult to already gaping injury, Scotland are the first European country to be eliminated – good God, even San Marino still have a mathematical chance of qualifying…


It is 35 years since Scotland last had a team many of us thought were one of the best in the world. The aforementioned Ally MacLeod was the national team manager who took Scotland to the World Cup Finals in Argentina and the bold Ally was telling anyone who would listen that the Scots ‘would return home with a medal’. Defeat from Peru, a humiliating draw with Iran and the sending home of winger Willie Johnston for taking a banned stimulant – in truth, Willie only took hay fever medication called Reactive which contained traces of the stimulant – meant the Scots were sent home with their tails between their collective legs. Not even a thrilling victory over the Netherlands – who would go on to reach the final itself – in the final group game could save face. Since 1978, Scotland’s football team has been in steady decline.


There has been the odd occasion or two when it seemed Scottish football was about to make its presence felt again. We came close to qualifying for Euro 2008 with the Scots famously defeating France home and away. Only a narrow defeat by Italy in the final qualification game prevented Scotland from gracing the European Championship finals. In 2003 Scotland defeated the Netherlands in a play-off for a place at the Euro 2004 finals. The trouble was it was only a 1-0 win in the first leg – and Scotland crumbled 6-0 in the return in Amsterdam…


1998 was the last time Scotland played in the World Cup Finals. A brave showing by Craig Brown’s men in the opening game against holders Brazil still resulted in defeat. This was followed by a draw against Norway, defeat from Morocco and the return tickets back home…


What I find particularly sad is that decades of, for the most part, abject failure has taken its toll. Apathy now seems to reign over the national side. It wasn’t until the afternoon of the game that I realised Scotland’s tie against Serbia was live on the ‘cooncil telly’ that night – and I had far better things to do than watch the BBC’s Rob McLean and co pick over the carcass that is Scotland’s latest attempt to reach the World Cup Finals…


Unlike some so-called experts – step forward Pat Nevin – I don’t have the answer to Scotland’s troubles. I am simply saddened that our country’s football team is as poor as it is. I hanker after the days when Scotland reached six World Cup Finals out of seven. Particularly the Willie Ormond era when Scotland were the only unbeaten country at the 1974 World Cup Finals and were within a Billy Bremner hairs breadth of beating Brazil. Even the Ally MacLeod era, pre Argentina debacle, when Scotland brushed aside European Champions Czechoslovakia and defeated England at Wembley with a style and swagger that shouted ‘Wha’s like us?’


Jock Stein took over from the much maligned MacLeod and while he steadied the ship and guided Scotland to the World Cup Finals in Spain in 1982 and for much of the successful qualifying campaign for Mexico 1986 – tragically, the big man died during Scotland’s draw in Wales which secured a play-off place – there still seemed to be something missing from the Scotland sides of that era.


Sadly, Scotland no longer produces players such as Jimmy Johnstone, Willie Johnston, Jim Baxter, Denis Law and Kenny Dalglish. The focus now seems to be about trying not to lose rather than displaying flamboyance and skill by putting opponents to the sword. I’m tried hearing the same old script trotted out – ‘we’re only a small country, we shouldn’t expect to produce hugely talented players blah, blah, blah…’ I know we live in a different era now and society has changed so much in the last five decades but when I see some of the players who play for Scotland now and compare them to the greats of yesteryear it makes me mourn for our national side. Scotland has failed to adapt to the changing world. When we qualified for the 1978 World Cup Finals we did so from a qualifying group of just three countries – Scotland, Czechoslovakia and Wales. Now it seems we just don’t have the players to cope with a two year qualifying campaign and our international ranking may well be sinking to the levels of the Faroe Islands, Malta and Cyprus before long. In fact, we may have already reached that level.


The fervour and hype that precipitated the 1978 World Cup Finals will never be repeated. Indeed, the SFA would never wish it repeated given the embarrassment that enveloped the national team at that time. There seems to me to have been a deliberate attempt to play down Scotland’s prospects ever since for fear we are exposed to the same humiliation again.


Sadly, as the likes of Serbia, Macedonia and Wales pass us by, it seems we no longer need to play down our prospects – our national team’s lack of ability has resulted in a downward spiral we may never escape from.

The Long Trip to Hampden 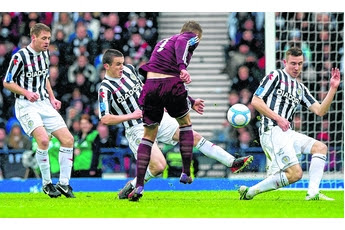 Last Sunday, I was looking forward to my second cup final in ten months, having spent decades as a Hearts supporter enjoying only sporadic visits to the National Stadium. So it was that thousands of maroon clad supporters headed to Hampden Park with more expectation than hope given our Scottish Communities League Cup Final opponents were St. Mirren.
My partner, Marion, having felt she missed something by not attending the William Hill Scottish Cup Final demolition of Hibernian last year, accompanied me this time round and we set off from Leith on a cold, dank Sunday morning. However, much in the same way an attempt to rekindle the spark of an old flame can fizzle out like a damp squib, there was something about that day in the middle of March that invoked a feeling of ‘it’s not the same’ right from the off.


For a start the weather was, as we say in Scotland, driech. Dark grey clouds, a stiff breeze and intermittent rain did nothing to enhance the occasion as we set off on the 10.15 train to Glasgow. The fact there were engineering works on the main railway line between Scotland’s capital city and Scotland’s largest city meant the hundreds of Hearts fans aboard, along with the usual Sunday travellers, had to endure the ‘slow train to Glasgow’ which wasn’t going the usual route via Linlithgow and Falkirk, but another route which called at every village and town on the way. We knew we were in for a long day when we started yawning at the train’s second stop on the journey - Edinburgh Park. A trip that usually takes under an hour would take an hour and twenty minutes - although it seemed much longer.


Heavy rain greeted our arrival in Glasgow and, being a Sunday, most of the pubs weren’t open until 12.30 meaning we had time to kill. Of course, I was delighted to accompany Marion to the Buchanan Shopping Centre - I mean who wants to be supping pints of pre cup final ale when one could be looking at clothes in Next and Debenhams…?


We did manage a wee drink or two before heading to Hampden but the continual rain was literally a bit of a dampener as we headed to the East Stand and joined the thronging masses of the Hearts support behind the goal. The atmosphere as kick off approached was good but perhaps unsurprisingly, it lacked the intensity of the previous cup final against Hibernian. There was almost a feeling of ‘it’s only St. Mirren and it’s only the Scottish Communities League Cup’, the winning of which would be great to see but there would be no place in next season’s Europa League for doing so. I felt like making this point as the huge Hearts support bellowed out the European song and ‘We’re Going to Europe’ just before kick off.


When Ryan Stevenson put Hearts in front after just ten minutes I was leaping about like a ten year old rather than showing the dignity a 51 year old should be displaying, something the look on my partner’s face appeared to indicate. Most of the other 25,000 Hearts supporters did likewise and it rather shot to pieces the argument that this was a ‘wee cup’ and it didn’t really matter. Hearts in a cup final always matters.


Despite dominating the first half an hour and missing a couple of gilt edged chances, Hearts lost a goal eight minutes before half time and rather capitulated in the second half. Stevenson’s second goal eight minutes before the end of the game gave us hope, albeit of the false variety. We shuffled out of the National Stadium shortly afterwards and filed along patiently in the rain for the train at Mount Florida en route to Glasgow Queen Street via Central Station. The engineering works meant it was Queen Street Low Level, which was rather apt given the mood we were all in.


The train journey back to Auld Reekie was horrendous. Given it was full of Hearts supporters who didn’t feel like hanging around Glasgow longer than was necessary on a wet Sunday evening, the seats were all taken and so Marion and I had to stand all the way back to the capital. Well, not quite all the way - we did get a seat when the train left Edinburgh Park…


The day brought back bitter memories of the last time Hearts played St. Mirren at Hampden Park. The Maroons lost the Scottish Cup semi-final of 1987 to the Paisley Buddies and I had to endure a long, painful trek home to Aberdeen, where I was living at the time. That day, like 17 March 2013, was a depressing one.


Yet, at the end of it all, there was a feeling of a shared experience. The train on the way home was full of Hearts supporters but it was a quiet, if long journey. No one was in the mood to strike up a chorus of Glorious Hearts and the feeling was one of just wanting to get home.


Such is the life of a Hearts supporter. We have more highs and lows than a liftman’s nightmare. From the ecstatic scenes following the 5-1 thrashing of Hibernian last May to the crushing disappointment of losing to St. Mirren last week. I knew that, despite everything that has happened to our club this season, those same fans would go through the same experience all over again in the name of Heart of Midlothian FC.


Follow the Hearts and you can’t go wrong. Well, it does go wrong on occasion. But no matter what, we’ll support you ever more!