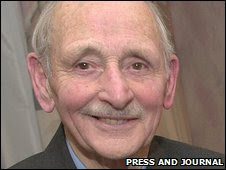 Archie Baird, a member of Aberdeen's legendary 1947 Scottish Cup winning team, has died at the age of 90. The Dons hero was the last surviving member of the first Aberdeen team to lift the famous old trophy.
Born in 1919, Baird signed for Aberdeen in 1938, but the outbreak of the Second World War meant he did not make his competitive debut until 1946. He made 104 league appearances for Aberdeen, scoring 26 goals. He left Aberdeen to join St Johnstone and then became a teacher and journalist.
Fittingly, Aberdeen meet St. Johnstone at Pittodrie on Saturday - Remembrance weekend - and a minute's silence will be held for the player still remembered fondly in the Granite City.
Posted by Mike Smith at 13:36