Football Can Be Cruel 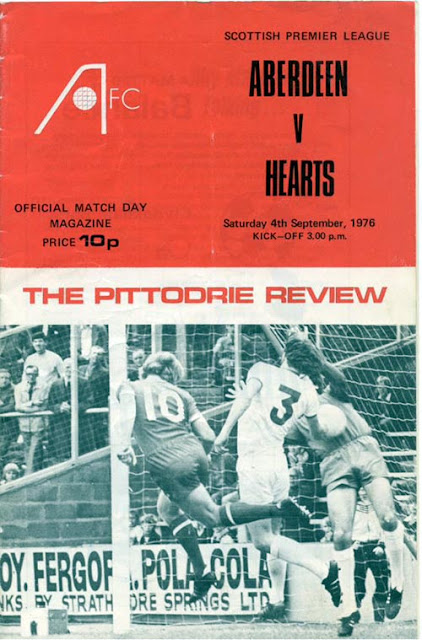 On Saturday Hearts thrashed Aberdeen 5-0. The Dons are going through a bad spell just now - it’s just over a month since The Dons lost 9-0 to Celtic on a dark November afternoon in the east end of Glasgow. Having lived in the Granite City many years ago I still have a few friends in the north-east and I can’t deny I sent numerous texts to some of them that Saturday evening as well as last weekend. As is the way with football fans you would be correct in surmising these texts weren’t of the supportive nature and sending the contact details of the local branch of The Samaritans didn’t go down too well in some quarters.

I actually spent the Saturday afternoon of the 9-0 debacle in the company of an Aberdeen fan - namely my dear old mum. With her health not what it once was she moved from Aberdeen to Edinburgh three and a half years ago in order that she could be closer to me but her affinity to the Dons has not diminished - if anything, it’s strengthened. We sat in her sheltered accommodation flat and watched the BBC’s football results service via the ‘red button’ on her digital television. Once Paul Hartley also pressed ‘red’ and was sent off, the floodgates inevitably opened and my mother watched news of the goals being scored at Celtic Park through fingers covering her eyes.

It was the nature of the afternoon that she was cruelly denied even a brief flicker of hope. Celtic were 4-0 ahead early in the second half when the score flashed on the screen of Celtic 4 Aberdeen 1 - scorer Macgennis. I tried to instil some hope to my mother by saying the comeback was on - after all didn’t a certain team from Edinburgh lose a 6-2 lead earlier this year? Sadly, before she had a chance to respond the screen changed again. This time the score read Celtic 6 Aberdeen 0 - it transpired that the goal Macgennis had scored wasn’t for Aberdeen - it was an own goal. Moreover, by the time the BBC had realised their mistake a now rampant Celtic had scored again. This compounded my poor mother’s misery which rapidly descended into anguish when the seventh, eighth and ninth goals went in.

This little bit of drama reminded me of a couple of occasions when I’ve been at a game where all wasn’t quite as it seemed. Curiously, both those games involved Hearts and Aberdeen. Back in the mists of time at the beginning of season 1976/77, Hearts played the first league game of the season at Pittodrie. I was fourteen at the time and, for reasons I no longer care to remember, I arrived at the ground a couple of minutes after kick-off. There was the usual large Hearts support behind the goal but as the game was just minutes old, I didn’t think to ask if there had been any scoring yet. Aberdeen scored after just five minutes and when home favourite Davie Robb added a second with just five minutes to go I thought that was it. However, Hearts Donald Park scored a couple of minutes later - small consolation I thought. When the final whistle blew, I made for the exits with a heavy heart - until I heard a fellow Jambo say that a 2-2 draw at Aberdeen wasn’t a bad start to the season. It transpired I had missed Drew Busby’s opening goal in the first minute and therefore believed Hearts had lost the game. I learnt two lessons that day - firstly make damn sure you get to the game on time and secondly, if you don’t just ask someone the score.

The other occasion was circa 1992 when Hearts entertained The Dons at Tynecastle. I sat in the company of one of the infamous Mrs Smith’s relatives in the old enclosure. He was - and still is - an Aberdeen fan. Hearts went ahead through John Robertson but the visitors thought they had equalised only for the goal to be disallowed. As the referee was considering his decision, my in-law headed for the gents - unaware the goal was about to be chalked off for offside. When he returned, I was unaware that he was unaware the goal hadn’t stood. There was no further scoring and when the final whistle blew, he put his arm around my shoulder and said ‘well, I reckon 1-1 is a fair result’. It took a considerable effort by me to persuade him that Hearts had actually won the game 1-0...

Which proves, as Aberdeen discovered a few weeks ago in the east end of Glasgow, that football can be a cruel game.
Posted by Mike Smith at 13:14