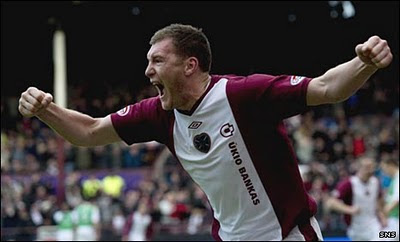 Hearts supporters of my generation know not to get too full of ourselves. The Jambos went into the first Edinburgh derby of the New Year as the hottest favourites for years, given the respective records of the teams of late. In the build up to the first Edinburgh derby to be played on 1 January since Adullamite was a boy, many Hearts fans - and I confess, this includes me - have been teasing our friends of the Hibernian persuasion of just how much pain our free-flowing team would inflict on those from across the city. Such talk, of course, is dangerous and so it nearly proved on the first day of 2011.

Hearts dominated the game from start to finish but dogged defending, an element of luck and a curious decision from referee Calum Murray meant that for 85 minutes the game remained goalless  - and it seemed Hibs would leave Gorgie with a precious point. An indication of what was to come came as early as the 6th minute when Hibs Ian Murray launched himself at Hearts Ian Black with a forearm smash that left the Hearts man out cold and requiring smelling salts. When referee Murray called his namesake over we all looked for the red card to be flashed. Instead it was just yellow and the player who once had 7-0 shaved into the back of his head in a previous Edinburgh derby could count himself lucky to remain on the field.

Hearts then camped inside the Hibs half for the remainder of the game but found it difficult to break through the Hibs rearguard. Kevin Kyle and Calum Elliot in particular had glorious chances but Hibs keeper Mark Brown was inspired and kept out everything that was thrown at him. The second half followed the same pattern as the first. Towards the end Hearts withdrew the somewhat quiet David Templeton and replaced him with Novikovas and took off Elliot for Gary Glen. It was the latter who missed the best chance of the game when Novikovas delivered an inviting cross only for Glen to put the ball wide from five yards. We suspected then the breakthrough would never come and it would be a goalless start to 2011. Worse still, on a rare breakaway Hibs substitute Colin Nish had the chance to steal all three points for the visitors but screwed his shot wide of the goal when he really should have scored. But then a little Lithuanian winger produced a piece of magic.

With just four minutes left, Hearts collected the ball from a Hibs throw in and sent it to Novikovas. The wee fella danced his way down the left wing, skipped past a couple of Hibs challenges before sweeping in a superb cross to the far post - where Kevin Kyle headed towards goal. Keeper Brown, despite his previous heroics, could only palm the ball into the net and three quarters of Tynecastle erupted. It was enough to seal the game for Hearts and there was unbridled joy in Gorgie.

The win continued Hearts magnificent run of late. They have now taken an astonishing 25 points from a possible 27 - despite the customary words of caution, this is championship challenging form in anyone's language. Hearts now sit just two points behind Rangers and three behind Celtic - although the Old Firm who play each other at Ibrox today have games in hand.

The new year began as the old year ended - with Hearts winning. With a break now for the Scottish Cup, Hearts next four league fixtures - against Dundee United at Tannadice, Kilmarnock at Rugby Park, Rangers at Tynecastle and Celtic at Celtic Park- will prove a stern test for the revitalised maroons. It's a huge ask but if Hearts take twelve points from those games they really will be serious title contenders.
Posted by Mike Smith at 00:04