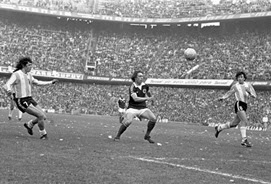 Hearts failure to clinch promotion from the First Division at the end of season 1981/82 prompted player-manager Alex Macdonald to head to his old stomping ground of Ibrox Stadium for the experience need to guide youngsters John Robertson, Gary Mackay and Davie Bowman. As well as appointing former Ger Sandy Jardine as his right hand man, Macdonald also secured the services of winger Willie Johnston in the summer of 1982.

At the age of 36, ‘Bud’ was in the twilight of his controversial career that included 17 red cards and infamously being sent home from the Scotland World Cup squad in Argentina in 1978. Many observers doubted the wisdom of bringing such a character to Tynecastle. However, Willie Johnston achieved much in the game. He scored in Rangers European Cup Winners Cup Final triumph over Dynamo Moscow in 1972 and played at the highest level in English football with West Bromwich Albion who paid Rangers close to £140k for his services - which in December 1972 was a small fortune.

It was during his spell at The Hawthorns that Johnston was sent home from Scotland’s World Cup squad in 1978 after taking medication for his hay fever. However, Reactivan was a banned stimulant and Johnston inadvertently brought shame on his country although it’s fair to say he was naïve rather than trying to cheat. West Brom manager Ron Atkinson met Bud at the airport on his return and reportedly said ‘there is some good news - you’ve got a sponsorship deal with Boots the Chemist!’ It was also reported that Johnston once sold a garden shed to a West Brom fan while waiting to take a corner kick as a player was getting treatment for an injury!

Johnston left the midlands for a spell with Vancouver Whitecaps in 1979 before returning for a brief spell with Birmingham City and a return to Rangers in 1980. Whilst in his second spell at Rangers, Johnston infamously stamped on Aberdeen’s John McMaster who required the kiss of life. Afterwards came a classic Bud quote - ‘I’m not proud of what I did - I thought it was Willie Miller’. Two years later he signed for Hearts and helped Hearts secure promotion. His experience helped the maroons not only survive in the Premier League but qualify for the UEFA Cup - it was Bud who scored the goal in a 1-1 draw against Celtic that secured Hearts place in Europe the following season.

After leaving Hearts, Johnston had a brief sojourn at East Fife before retiring at the age of 39. Willie Johnston was, without doubt, one of the most colourful players to play for Hearts and even today, the likes of Gary Mackay and John Robertson say he was a huge influence on their successful careers. Today, Willie ’Bud’ Johnston runs the Port Brae pub in Kirkcaldy.
Posted by Mike Smith at 08:32